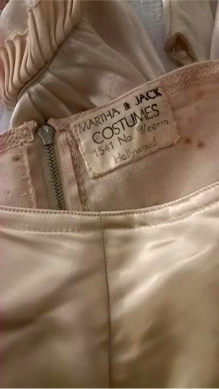 Now that we have these amazing dance clothes, what can we uncover about them? I approached Laura Windley of Lindyshopper first for her knowledge of vintage and swing dance clothes. Her observations were key to understanding what kind of clues and further questions these offer. Next, I was introduced by Kate Hedin to Lewis Orchard, a designer and fashion historian. He provided me with expert opinion, comparision photos and some fascinating facts about the designer. I have a huge thanks to give these two for their insights, which I’ve combined based on questions below.

What are some key design and construction elements of the Venice Beach clip dress?

Laura: I find this dress to be very forward thinking in terms of design, and is a special dress in terms of the princess seams going all the way to the bottom of the dress, where there are 11 separate sections/godets.

Lewis: Genevieve’s ‘white dress’, worn in the Venice Beach clip, is made from an ivory satin. It has yellowed in some areas, possibly due to the effects of sunlight/aging on the fibers, fabric treatment, or dye. The satin seems to be woven from an artificial fibre. The dress has full length Princess line seams, front and back. The ‘Princess line’ is a style attributed to the Couturier Charles Frederick Worth, and is traditionally named after  one of his clients, Princess Alexandra. The style utilises long vertical shaped seams,  which enabled  both a bodice and skirt to be cut as one, without horizontal seams at the waist. This innovation created options for one-piece garments made from unbroken panels of fabric, without bulky darts, and a body-contoured shape.

The bodice of the garment is interfaced with what seems to be a layer of natural cotton. This additional layer  reinforces  the satin and  makes the reflective satin surface resistant to creasing as it moves. This also helps avoid any wrinkles and creases caused by lingerie, and strengthens the seams.

The satin and cotton have been joined together using specialist stitching, (possibly a variation of a flatlock stitch) indicating that the garment is not home-made, but manufactured using industrial equipment. Seams have been ‘pinked’ to avoid the ridges of any seam bindings being visible on the satin surface. The skirt is constructed using inset godet panels, and the bodice has inset short sleeves.

The short sleeves and neckline seem to reference historic fashion, such as the sleeves of the 1810’s, or 1860’s. (See illus.) The garment combines these classic features with additional modern ones, such as a back zipper ,and a raised hemline. Genevieve’s dress references styles from the past, just as we look back at her own style.

What does this tell us about early innovation in swing dance clothes?

Laura: That Genevieve chose a white silk satin dress for a dance competition is a really bold move, she’s definitely the dressiest of the followers in the clip. The gored skirt that flares out that much, that high is not something that was particularly common in dress patterns of the mid-30’s. I’m thinking in particular of Ginger Rogers’ black dress in “Swing Time”, which is clearly gored and possibly made of magic. Women just did not wear full skirts like that for every day, so assuming that these are made for dancing or purchased with dancing in mind is very plausible.

Lewis: The design also considers the contemporary perspective on function and modesty, just as we would do today. America was at the forefront of sportswear design in the 1930’s.  Swing dancing was new and distinctively American. To my mind, Genevieve’s wardrobe is an important example of American design, and design history.

What about the second ivory dress with cut-away sleeves?

Lewis: It is interesting to compare the Venice Beach clip dress with the second ivory dress, and note some key differences. They indicate that the second costume may have been a response, and improvement to the first, or simply the better designed of two original options. This second  dress seems to be identical in design from the waist down, but has different sleeves and neckline. The fabric is a thinner crepe backed satin, which provides some stretch. It is lined  with a fine knitted stretch jersey, which was historically used for sportswear and  hosiery.  At this date (C1938) there were no stretch fibers, such as Lycra, so stretch was achieved using  knitted fabrics, weave construction (such as crepe), or regular fabric used on the diagonal (bias cutting).

The sleeves are only partially attached at the arm holes, with openings under the arms, enabling the arms to be lifted freely. This dress has been used much more, and its possible that it was better suited to dance movement, and comfort.

Laura: The cutaway armpits are a great, it seems that they should be essential when wearing silk and sweating.

What are some additional elements that the clothes share?

Laura: That they are all white, except for the purple skirt, is really interesting to me because white is worn to stand out, but is also a pain to maintain and keep clean. I don’t think the color is uncommon from the era – the purple shade is definitely spot on for purples of this era, and white would have been a common fabric color for the summer. All of the skirts have hand stitching around the pinking on hems, or a hand rolled hem which is very labor intensive. It is clear that she had an income stream that supported her owning these costumes, particularly since the separates appear to be well-worn and battle scarred.

Lewis: The remaining garments, also made of satin, share the same skirt shapes and technical construction. They have robust seems,  sturdy linings, and clear unfussy features.  A pair of dance knickers survives, indicating that the Venice Beach clip dress may have been worn with something similar. Other images of similar dresses show matching knickers.

When, where, and by whom, could these clothes have been made?

Laura: I do think the dress is from 1938, based on the sleeves, the hem length, and particularly the princess seams, which is not a common thing to find in 1930’s clothing. These were likely produced in Southern California as costumes – the only other likely place they could have been produced is New York, given the industry. As a side style note, Genevieve’s hair ribbon and bow remind me of Snow White, which was released in December of 1937.

Lewis: The most interesting feature of the remaining garments, is a label, and a matching  stamp, identifying the designers “Martha & Jack” Costumes, 1541 No. Western, Hollywood.

Here is the information Lewis Orchard uncovered about the costume company “Martha and Jack”.

A 1938 trade directory identifies the pair as “Martha Austin and Jack E. Mosser”,  working from a nearby address, 1664 N. Western Ave. A 1939 directory lists the label address of 1541, No. Western, Hollywood, and a new partner, G.E Rule. The 1940 International Motion Picture Almanac, lists a new business, “Jacks of Hollywood”, at the same 1541 address , but only refers to George Rule and Jack Mosser.

The 1938 directory had to be prepared in advance, so the business must have moved to the 1541 address after the 1664 address was supplied in 1937. The business had ceased trading by the time the 1940 directory was being prepared in 1939, so this places the two labelled garments as having been produced C1938/1939. The ‘beach clip’ is understood to have been filmed in September 1938.

Although little is currently known about Martha Austin, Jack E. Mosser seems to have been a well known, and prolific costume supplier. The publication ‘“Themis of Zeta Tau Alpha”, Pub. 1948, states that a design by Joseph Dimmit, was “made by Jack’s of Hollywood, leading creator of motion picture costumes, for over 30 years”. It is interesting to note that Jack’s was also providing costumes for ballet, dance and ice-skating.

So, while it seems that Jack may have been designing and making costumes since C1917 it is  not clear what role G. E. Rule had in the company. He may be the same  ‘George Rule’ who is recorded as an uncredited property master for “Gone With The Wind” (1939). Jacks of Hollywood supplied costumes for theater productions and film until Jack Mosser’s death in 1964. He supplied costumes for a wide variety of commercial productions and films, such as “La Vida Bohemia” (1938) starring Rosita Diaz, “Graduation Ball” (1945), “Pardon Our French” on Broadway (1950)and most famously is co-credited as ‘costume designer’ for the film “Jack and the Beanstalk” (1952) featuring Abbot and Costello.

Were these street clothes, costumes, or something in between?

Laura: The design of all the garments are most certainly made as costumes, not as formal or street wear. For example, the structure (sewn in boning) in the purple skirt is fairly common in undergarments or costumes where you want a certain silhouette. The skirt was a bit like a girdle in that respect. In terms of maintaining a shape, it may have contributed to the garment staying put instead of rotating around her body.

Lewis: It is interesting to consider if Genevieve was wearing a dress or a costume. Is a cotton lined, satin dress, that may require matching knickers, something that a young, fashionable, non-dancer would wear? Although unlabelled, the dress is clearly manufactured by someone with specialist machinery, and experience. It can be linked directly to similar labelled examples that were produced  C1938/9. Other details indicate it is a purpose made costume. There are currently no features indicating that it is  a standard, commercially available fashionable dress.

It is also interesting to compare the Venice Beach clip dress with what other swing dancers were wearing at that time and area. Betty Takier wears a dark, similar dress in the same clip,  and ‘Snookie’  Bishop can be seen wearing a satin dress, with matching knickers in promotional stills (see photo below). In the color clip filmed at Gilmore stadium we see further examples, and even what seems to be matching Lead/Follow outfits. Would a regular store sell matching his and hers garments? 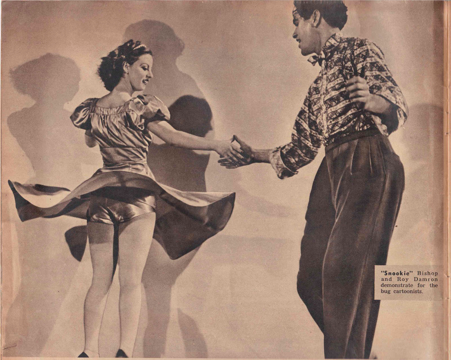 Given the similarity of these garments, and their specialist features, it is reasonable to wonder if these dancers were performing/competing regularly enough that they were sourcing specific, specially made dance costumes that resulted in a shared, and distinctive style. Did these designs all come from the same source?

We know that dance clothes have specific requirements, even when we buy clothing to dance in today. Heat, comfort, stretch, and movement influence our dress decisions. We may avoid belts, pockets, draped sleeves, backless features, tight skirts, and wrap dresses. This is perhaps why the Venice Beach clip dress still looks relevant to us, and why a community of swing dancers still make similar choices, creating distinctive dance ‘looks’ that we see on dance floors across the world.

Stay tuned for our next article, wherein we learn from Jean Veloz about her clothing choices as an original southern California swing dancer!